GEHRAIYAAN is a story of two couples. Alisha (Deepika Padukone) is a yoga instructor based in Mumbai. She is developing a yoga-based app, for which she requires funding. She has a strained relationship with her father Vinod (Naseeruddin Shah). Her mother (Pavleen Gujral) died by suicide, after Vinod forcibly relocated to Nashik with his family. She has still not been able to come out of the trauma of losing her mother. Since 6 years, Alisha is in a relationship with Karan (Dhairya Karwa), an advertising professional who quit his job to write his novel. Their relationship also develops cracks due to lack of communication. Alisha’s cousin Tia (Ananya Panday) invites the former and Karan to Tia’s farmhouse in Alibaug. Tia knows Karan very well too and she wants Alisha and Karan to meet her boyfriend, Zain (Siddhant Chaturvedi). The foursome meet and Alisha and Zain get attracted to each other, without the knowledge of their respective partners. Zain is a self-made man who left his violent father and helpless mother at a young age and worked his way up. He’s into the realty business and is trying to put together an expensive, dream project. Tia’s father is also helping Zain in his venture. After having a gala time in Alibaug, they return to Mumbai. Zain and Alisha keep in touch, secretly. Zain even visits Alisha’s yoga studio as he has a back pain. Here, both get intimate. Soon, Tia leaves for the USA to settle some family legal issues while Karan relocates to Alibaug to finish his novel. This gives a golden opportunity to Alisha and Zain and they both start an affair. Zain also raises funds for Alisha’s app. After a few days, Karan returns to Mumbai. Alisha realizes that he hid from her that a publishing house declined to publish his novel. She also found it difficult to communicate with him and to digest that he has not been earning. Hence, they break up. Zain also promises to end his affair with Tia but there’s a catch and he needs to wait for 6 months. At a party thrown to celebrate Zain and Tia’s third anniversary, Zain is informed by his business associate Jitesh (Rajat Kapoor) that they are going to be in a big time and legal and financial mess after a banker, who approved their bad loan, got arrested. Zain is already processing this information when Alisha turns up and tells him that she is pregnant with his child. What happens next forms the rest of the film. 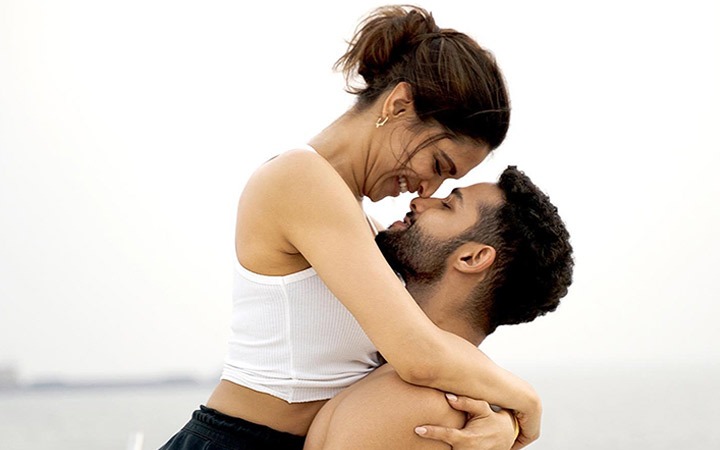 Ayesha Devitre Dhillon and Shakun Batra’s story is layered and offers an interesting take on modern-day relationships, which is rarely seen in our films. Ayesha Devitre Dhillon, Sumit Roy and Shakun Batra’s screenplay (additional screenplay by Yash Sahai) is peppered with intriguing moments. However, the writing is very niche. The first hour is predictable and it takes a while to get a hang of the narrative style of the film. Yash Sahai and Ayesha Devitre Dhillon’s dialogues are conversational and even acidic at places. The lines mouthed by the actor are very real and straight out of life. There’s hardly any funny punchline and hence, there’s very limited scope for humor. However, it’s not a problem as there’s a lot of interesting stuff throughout the film.

Shakun Batra’s direction is more on the lines of the ones seen in world cinema. This time, the director is just not touching upon the relationship-based complexities but also the business angle. The comment he makes on this aspect apart from cheating in relationships adds a lot to the film. On the flipside, the beginning portions are difficult to comprehend. A lot of information is thrown in the start of the film as to how the characters are related to each other and especially their parents. Also, the film has a niche appeal and hence, a major section of the audience would find it difficult to relate to the goings-on.

GEHRAIYAAN’s beginning is a bit shaky. The way Zain and Alisha’s bond grows is neatly and organically executed. Even the problems they face doesn’t seem sudden and is totally believable. The film takes a turn when Alisha gets pregnant and Zain faces problems in his business. Several scenes in the second half stand out, particularly Tia asking Zain whether he’s cheating on her, Zain and Jitesh’s confrontation and Zain and Tia’s fight in the parking lot. The last 30 minutes comes as a bolt from the blue is seen to be believed. The final scene will leave viewers stunned.

Deepika Padukone has the maximum screen time and delivers one of the finest performances of her illustrious career. This is not an easy act and the role required someone of the caliber of Deepika to pull it off nicely. Watch out for her in the last hour of the film, when she communicates beautifully just through her eyes and very few dialogues. Siddhant Chaturvedi gets to play a great part and he nails it. There’s a lot to his character and his track than what is shown in the trailer and he’s particularly great in the second half. Ananya Panday also tries to give her best and is very memorable in the scene where she confronts Siddhant Chaturvedi and when she tells the truth to Deepika about the Alibaug property in the end. Dhairya Karwa gets limited scope and is decent. Naseeruddin Shah, as always, is dependable. Rajat Kapoor has a crucial part and is terrific. Pavleen Gujral, Anaaya Anand (young Alisha), Vihaan Chaudhary (Bejoy; banker), Deepak Kriplani (Karan’s father), Kanika Dang (Karan’s mother), Kamal Adib (Kamal; old man stranded in a boat), Mohini Kewalramani (Kamal’s wife ) and Shereena Master (Anika) also do a fine job.

Deepika’s Rapid Fire: “People will love Hrithik & my chemistry in Fighter because“ ”| Gehraiyaan

Oaff and Savera’s music has an international feel and works well with the film. ‘Doobey’ is the most memorable of the lot. The title track and ‘Gehraiyaan (Reprise)’ are soulful. ‘Beqaaboo’ fails to register. Oaff and Savera’s background score blends with the narrative and world-cinema-vibe of the movie.

Kaushal Shah’s cinematography is first-rate, especially the scenes shot in enclosed spaces. TP Abid’s production design is rich and authentic. Anaita Shroff Adajania’s costumes are stylish and reflect the upmarket and urban outlook of the characters. Nitesh Bhatia’s editing is smooth – the film is neither too dragging nor too quick. Special mention should be made of Dar Gai’s intimacy direction – the lovemaking scenes are aesthetically handled; and Ayush Ahuja’s sound design – the use of sound is quite creative.

On the whole, GEHRAIYAAN is a mature relationship drama but has a niche appeal. However the bravura performances and the exciting climax makes the film a decent watch.