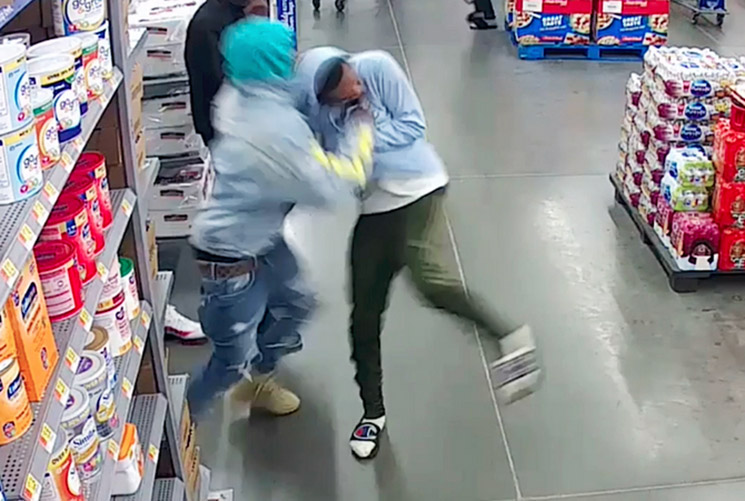 New video footage shows that rapper DaBaby may have triggered a fight that left a shopper dead in a North Carolina Walmart store in 2018.

DaBaby claimed he was approached by two young men who allegedly threatened him with a gun while he was shopping with his then-girlfriend and their children.

However, the footage shows the rapper to be the initial aggressor by sucker punching Craig’s best friend, Henry Douglas.

After DaBaby punched Douglas, Craig appears to pull a gun from his waistband, but then he tucked it back in before walking out of the frame.

The video ended after DaBaby shot Craig who fled into an aisle and collapsed where he was pronounced dead by medics.

Kirk told police he shot Craig in self-defense and to protect his family. Since dead men can’t talk – and a weapon was found near Craig’s body – the police believed the troubled rapper.

“I feel like they just swept it up under the rug,” Craig’s mother, LaWanda Horsley, tells Rolling Stone. “[DaBaby] knows what he did. I’m not doing this for no fame or anything, because at the end of the day, Jaylin Craig is gone. “

She added: “When I found out my son was killed, everything from the bottom of my feet came up and out of me. I never knew your body could feel like that.”

DaBaby was convicted in June 2019 of carrying a concealed weapon without a permit.

The rapper was back in the blog headlines this weekend after he teed off on one of his own artists, a Charlotte rapper named Wisdom

According to XXL magazine, the diminutive rapper came to blows with Wisdom backstage at the South Jam festival in Columbus on Friday, April 22.

Footage from the fight shows DaBaby throwing the first punch, before the two combatants are separated by a security guard.

In related news a Twitter user claims DaBaby nearly shot a co-worker who went to the rapper’s home to fix his cable.

The user tweeted that DaBaby overheard a conversation between his brother and the cable guy and assumed there was a threat made towards his brother.

The Twitter user wrote: “My co worker went to go fix his cable problems and for talking to his brother about fights and making gestures that baby thought they were squaring up and almost popped off on my co worker but his brother calmed him down.