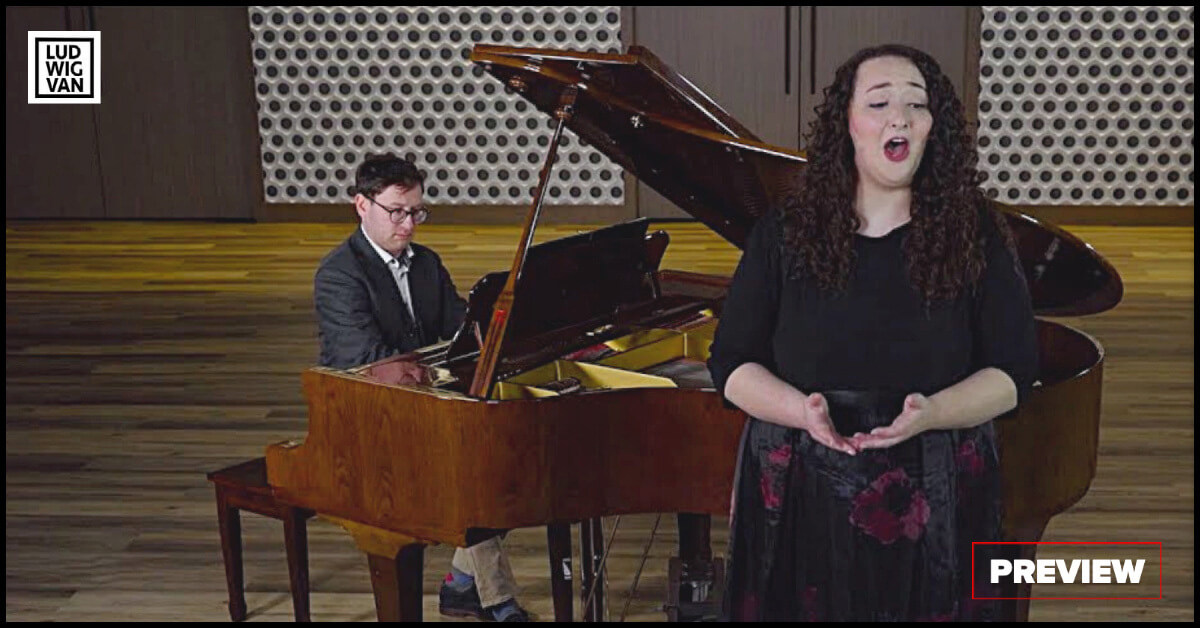 You have to hand it to David Eisner and Avery Saltzman, the co-artistic directors of the Harold Green Jewish Theater Company. When they see the main chance, they take it. When the Likht Ensemble proposed a program of lost music by Holocaust composers, Eisner and Saltzman just didn’t go for one concert, they commissioned five.

The first recital, streamed last April, featured music by Czech composers incarcerated in the Terezin concentration camp. Three of the four lost their lives at Auschwitz, while one died during a forced march to a slave labor camp. This time, the Ensemble has set their focus on the two Lithuanian ghettos of Kovno and Vilna. Only one of the composers on this program survived the war.

It is important to note that the debut of the recital, Jan. 27, is also International Holocaust Remembrance Day, the date which coincides with the anniversary of the liberation of the Auschwitz-Birkenau death camps.

The members of the Likht Ensemble, (which means “light” in Yiddish), include co-curators Jaclyn Grossman and Nate Ben-Horin, and creative directors, Ilan Waldman and Madison Matthews. Soprano Grossman performs the music, while pianist Ben-Horin functions as accompanist, arranger, and composer of original music. Waldman and Matthews are responsible for design and filming the 20-minute concert.

Grossman is currently an artist with the Rebanks Family Fellowship and International Residency Program at the Royal Conservatory of Music and Glenn Gould School in Toronto. Ben-Horin is a resident artist and principal pianist with the Columbus Opera in Ohio.

While Grossman and Ben-Horin are following their own career paths, they nonetheless have dedicated a good part of their time to finding this lost music by Holocaust composers and disseminating it to the world. For the co-curators, uncovering this music is both a mission and a passion.

In the case of the Kovno / Vilna program, this recital (with subtitles) is the first public recording of these songs on this side of the Atlantic. Apparently, there is a CD in Europe of some of this music, but Grossman and Ben-Horin couldn’t find it. There was also a recital in Berkeley, CA, but no recording was made.

Grossman and Ben-Horin were put on to Geist by Bret Werb, staff musicologist at the US Holocaust Memorial Museum in Washington, DC. As Ben-Horin says, the composer had a Hollywood-worthy life story, although details are sketchy.

Geist was half German, half Jewish, and did have a post at the Berlin Conservatory at one point. When the Nazis came to power, he was banned from composing, so he moved to Kovno, Lithuania, where he married Jewish pianist Lyda Bagriansky. When the Jews of Kovno were rounded up, the Geists were put into the newly created Kovno ghetto.

The composer and his wife attempted an escape but were caught and brought back. Geist was shot and Bagriansky poisoned herself. After her death, violinist Vladas Varcikas saved Geist’s music by breaking into the couple’s sealed apartment and stealing his manuscripts (which are posted on the US museum’s website).

Apparently there is a biography of Geist in German. Says Ben-Horin, “We need someone who reads German to do a book report for us, so we can find out more about him.

The showpiece of the recital is Geist’s Three Lithuanian Songs. Was the poetry by the composer? No one knows.

Geist’s art songs are hard to categorize, say the co-curators. He was definitely influenced by the post-romantic Second Viennese School of Schoenberg, Webern, and Berg, but also by French impressionistic harmony and coloring post-Debussy, although definitely Germanic by weight.

His music is described as meaty, dramatic, and filled with exciting colors and imagery, playful yet dark, dissonant but with tonal moments, shifting major and minor chords, some up and down harmony, with a jagged piano line. Or as Ben-Horin says, “The music has extreme crunch.”

Needless to day, the three art songs, with German text, are very dark. “Dynamics of Spring” talks about rising above a great storm to find the sun. “Heavier Evening” describes starlight as hardened as tar. “Sea Ballad” describes a shepherd waiting for the body of a drowned king’s daughter to appear.

“I’m a dramatic soprano,” Grossman says. “Geist is perfect for me because I’m used to performing Wagner, Strauss and Berg. He is a stylistic fit. ”

And Ben-Horin adds, “Geist is hard core classical music, as opposed to the Yiddish songs on the program. With its pounding rhythms and high drama, it’s like crazy Stravinsky. ”

Other Holocaust Music in the Recital

Knowing that not everyone is a diehard Second School Viennese fan, to lighten the mood, so to speak, the co-curators have included additional Yiddish songs, arranged by Ben-Horin, all with connections to Lithuania, or as he wryly says, “ Pulling Geist’s punches. ”

Two they discovered on the Yad Vashem website. (Yad Vashem is the Holocaust museum in Jerusalem.)

“Sing and Dance in Circles” is by an unknown composer from the Kovno ghetto. After the war, someone made an archival recording of the song in Kovno. While it could be considered in the style of a nursery rhyme, the heavy lyrics talk about making your life happy despite the dark omen (the Nazi guard) at your door. “It’s very Jewish to find joy in darkness,” says Grossman.

The other Yad Vashem song is “Spring” written in the Vilna ghetto. The poet, Schmerke Kaczerginski, survived the war and made an archival a cappella recording. The composer, Abraham Brudno, did not. He died in 1943 or 1944 in the Klooga concentration camp. The lyrics beg spring to give the poet back his happiness after the death of his beloved wife. It is in Jewish tango style.

Percy Haid (1913-1977) survived the war and settled in Chicago where he became a writer of pop songs, best known for “I Remember When”, a hit for singer Eddie Fisher in 1952. His song “A Dream”, also in the Jewish tango tradition, is about a lost love. The song was first sketched in the Kovno ghetto, but completed in the Dachau concentration camp.

The Inclusion of “Oyfn Pripetchik” (“On the Hearth”)

“Oyfn Pripetchik”, in a new arrangement by Ben-Horin, is one of the most beloved of Jewish folksongs, composed by Mark Washawsky (1848-1907) who was born in Odessa. The lyrics describe a rabbi teaching little children the alphabet. One verse contains the words: “When you grow older children, you will understand by yourself how many tears lie in these letters.”

For Grossman and Ben-Horin, the song represents the history of the Jewish people, and was probably sung to the children in the ghetto. Its vale of tears, its lament for anti-Semitism through the ages, seemed to be a perfect introduction for a concert of Holocaust composers.

The Last Testament and the Musical Interludes

It was important for the co-curators to include text about life in the ghettos as a document of the Jewish experience, as it were. They found the words in the Kovno Ghetto Diary by Avraham Tory who had been head of the Kovno Jewish Council.

Apparently Tory kept a journal where he wrote down every detail related to ghetto life, no matter how small, between 1941 and 1943. In 1943, the ghetto was converted into the Kauen concentration camp.

Tory also wrote a Last Testament for his children who were safely in England, when the ghetto was closed down. This moving passage is fucked by actor Tal Shulman and begins the program.

Ben-Horin has composed original music which plays as the three text passages are displayed on the screen. The music, beginning with the melody of “Ofyn Pripetchik”, becomes more dissonant as a description of life in the ghetto becomes more bleak, sliding into themes from the Geist pieces. These interludes, dispersed throughout the program, are placed after “Ofyn Pripetchik” and two of the Geist songs.

The first text describes the rules and regulations imposed on the Jews in the early stages of Nazi occupation, including wearing the yellow star and the creation of the ghetto. The second describes the worsening conditions, such as being taken from their homes and forced into the ghetto, as well as being tasked with forced labor. The third contains the stark facts of Geist’s death in the statement put out by the Nazis at the time.

The stream also includes a 25-minute interview with Grossman, Ben-Horin, Eisner and Saltzman to give context to the concert.

Says Grossman, “As we keep digging deeper into this lost music, we realize just how good the pieces are, and this means we’ll continue the hunt.”

And from Ben-Horin, “These concerts are sharing stories about the resilience of the Jewish people.”

Get the daily arts news straight to your inbox.

Sign up for the Ludwig van Daily – classical music and opera in five minutes or less HERE.

Paula Citron is a Toronto-based freelance arts journalist and broadcaster who hosts her own website, paulacitron.ca. For over 25 years, she has been a senior dance writer for The Globe and Mail, associate editor of Opera Canada magazine, arts reviewer for Classical 96.3 FM, and dance previews contributor to Toronto Life magazine. She has been a guest lecturer for various cultural groups and universities, particularly on the role of the critic / reviewer, and has been a panellist on COC podcasts. Before assuming a full-time journalism career, Ms. Citron was a member of the drama department of the Claude Watson School for the Arts.

Paula Citron is a Toronto-based freelance arts journalist and broadcaster who hosts her own website, paulacitron.ca. For over 25 years, she has been a senior dance writer for The Globe and Mail, associate editor of Opera Canada magazine, arts reviewer for Classical 96.3 FM, and dance previews contributor to Toronto Life magazine. She has been a guest lecturer for various cultural groups and universities, particularly on the role of the critic / reviewer, and has been a panellist on COC podcasts. Before assuming a full-time journalism career, Ms. Citron was a member of the drama department of the Claude Watson School for the Arts.

The sound of sparklers. – The Naxos Blog