Some Like It Hotthe stage musical adaptation of the classic 1959 Billy Wilder film comedy, will make it to Broadway next fall, following a couple of pandemic-bedeviled years that saw the cancellation of a once-planned 2021 pre-New York engagement in Chicago.

With a cast fronted by Christian Borle, J. Harrison Ghee and Adrianna Hicks, who have been with the project through the workshop phase, Some Like It Hot will begin Broadway previews at the Shubert Theater on Nov. 1, 2022, with an opening night set for Sunday, Dec. 11, 2022, just in time for Broadway’s holiday sweet spot.

The dates and cast finalizations were announced today by producers The Shubert Organization and Neil Meron. The new musical will feature a book by playwright Matthew López (the Tony-winning The Inheritance) and Amber RuffinThe Amber Ruffin Show). Music is by Marc Shaiman, lyrics by Shaiman and Scott Wittman (Hairspray), with direction and choreography by Casey NicholawThe Book of Mormon).

Adrianna Hicks (COM)Six, The Color Purple) will play “Sugar,” the role made famous by Marilyn Monroe in the film.

Also in the cast will be Kevin Del Aguila (Frozen, Peter and the Starcatcher) as “Osgood,” NaTasha Yvette Williams (Tina: The Tina Turner Musical, Chicken and Biscuits) as “Sweet Sue,” Adam HellerCaroline, or Change) as “Mulligan,” and Mark LotitoThe Most Happy Fella, Victor / Victoria) as “Spats.”

The full company will be announced soon. 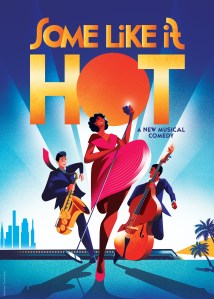 Set in Chicago during Prohibition, Some Like It Hot, as described in the synopsis, follows two musicians forced to flee the Windy City after witnessing a mob hit. With gangsters hot on their heels, they’re on the run as the newest members of the “swingingest” big band ever to cross the country. Can they hide in plain sight without completely losing themselves? Or will the mob, the truth, and maybe even love itself finally catch up to them?

The two lead male characters disguise themselves as women to hide out, from the mob, within the all-female band.

Some Like It Hot is produced by the Shubert Organization and Neil Meron and co-produced by MGM on Stage, Roy Furman, Robert Greenblatt, James L. Nederlander and Kenny Leon. DS Moynihan is an Executive Producer.