SHERSHAAH is the story of a brave Indian soldier who laid down his life during the 1999 Indo-Pakistan war. Vikram Batra (Sidharth Malhotra) stays with his parents in Palampur, Himachal and his twin brother, Vishal Batra. Since the time he was a child, he was interested in joining the army. At college, he meets Dimple (Kiara Advani) and falls for her. She reciprocates his love and both start a relationship. At this point, Vikram decides to join the merchant navy instead of the army as it pays better. One day, when Vikram drops Dimple home, Dimple’s father (Bijay J Anand) catches them red-handed. He tells Vikram that since he belongs to a different caste, he can’t marry Dimple. Dimple, however, protests and even tells her father that Vikram would earn more than him since he’s going to join the merchant navy. Meanwhile, Vikram starts getting second thoughts after his best friend Sunny (Sahil Vaid) insists that he should not give up his dream of joining the army. Vikram tells Dimple about his change of plans. This infuriates Dimple and she requests him not to make any more changes in future plans. Vikram then enrols himself at an army institute and passes with flying colors. In 1998, he gets his first posting at 13th Jammu and Kashmir Rifles at Sopore. Vikram is now a Lieutenant. His regiment comprises Lieutenant Sanjeev Jamwal (Shiv Panditt), Naib Sudebar Bansi Lal Sharma (Anil Charanjeett), Subedar Raghunath (Raj Arjun), Major Subrata Mukherjee (Abhiroy Singh) and Major Ajay Jasrotia aka Jassi (Nikitin Dheer), etc. In no time, Vikram proves his worth when he manages to capture a dreaded terrorist, Attaullah (David Browne), who’s part of the gang of an evil militant, Haider (Mir Sarwar). Vikram also befriends locals, unlike other soldiers. This proves to be of great help as a friendly local, Gafoor (Zahoor Zaidi), informs him that his son Arslaan (Afnan Ashia) has joined Haider’s gang but wants to leave them. Meanwhile, Haider attacks 13th Jammu and Kashmir Rifles while they were moving as an act of revenge for capturing Attaullah. Naib Sudebar Bansi Lal Sharma loses his life in this attack. Arslaan helps Vikram as he tells the latter about Haider’s hideout. In a risky operation, Vikram leads his team to hideout and manages to capture and eliminate Haider. Before his death, Haider however warns Vikram that something big and devastating is going to happen soon. What happens next forms the rest of the film. 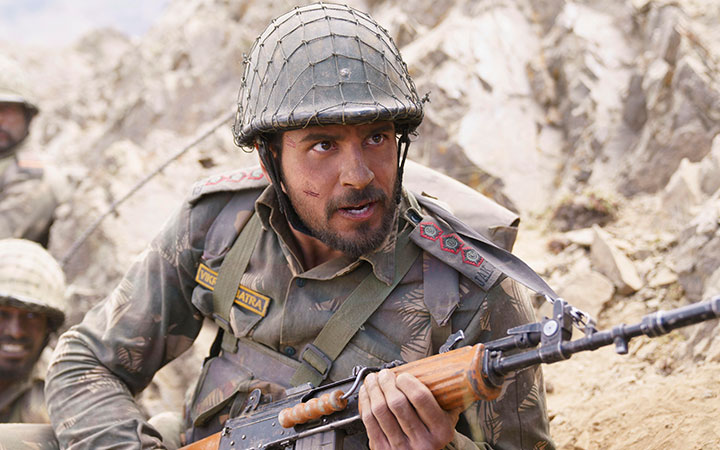 Sandeep Shrivastava’s story is well-researched and very interesting. Sandeep Shrivastava’s screenplay is effective and seamless. The writer has packed in a lot in 135 minutes and still kept the focus on Vikram Batra’s achievements as an army officer. On the flipside, a few developments are not explained properly in the first half. Sandeep Shrivastava’s dialogues are conversational but at the same time also have the required punch and drama. The use of abusive language, however, might not be appreciated by the family audience.

Vishnu Vardhan’s direction is supreme and he handles the film in a very commercial manner. He also doesn’t waste time and decides to highlight only whatever is required to take the story forward. Hence, once Attaullah is captured, except for a fleeting shot, he isn’t even shown in the film and yet, it doesn’t seem incomplete. Dimple’s father is an important character and even here, the director made his character impactful with minimal scenes. The masterstroke in this aspect is with regards to the character of Vikram Batra’s twin brother, Vishal. The action and war scenes are simplistic and easy to understand. However, the film seems a bit repetitive in the second half, during the scene where the soldiers are trying to capture the strategic points. Also, it is bewildering when and why Vikram suddenly decides to opt for the merchant navy. The other confusing bit in the film is the scene where Gafoor stops Vikram from meeting Arslaan. Earlier it was Gafoor who had approached Vikram and informed him that Arslaan is working for the militants.

SHERSHAAH begins on an unusual and thrilling note. The childhood and college scenes of Shershaah are lovely. The scene where Vikram and Dimple finally talk is okay but the scene becomes memorable thanks to the Rock Garden setting. The fun begins once Vikram joins his unit at Sopore and the bond he creates with the fellow soldiers. The scene where Vikram manages to capture Attaullah and the subsequent conversation with Sanjeev Jamwal is excellent. The sudden attack on the army convoy and the death of Naib Sudebar Bansi Lal Sharma is shocking. The scene where Vikram infiltrates into Haider’s hideout and kills him is terrific and would have been greeted with whistles and claps in cinemas. Post-interval, the war episode finally begins and as expected, it’s gripping. Some viewers might have complaints here as they must have already seen his life story in JP Dutta’s LOC KARGIL [2003]. SHERSHAAH even recreates the scene where the Pakistani soldier suggests that he’ll leave Indian territory if India gives Madhuri Dixit in return. Yet, the impact is made as LOC KARGIL doesn’t have much recall value. The last 20-25 minutes is very moving and are sure to make the viewer’s eyes moist. The end credits last for almost 11 minutes as the makers list out the names, photographs of the soldiers in Vikram Batra’s regiment and the accolades won by them. It’s a lovely gesture and apt for a film that beautifully pays an ode to the greatness of the Indian Army.

Sidharth Malhotra delivers the best performance of his career. The actor handles the part with sensitivity and perfection and completely gets into her skin. It also shows that he has evolved as an actor. It’s unfortunate that SHERSHAAH is not getting a theatrical release as it would have given a big boost to Sidharth’s career. Nevertheless, it’s surely a feather in his cap as it proves that his acting abilities are first-rate. Kiara Advani, as expected, has a limited role but looks adorable and delivers a fine performance. The scene where she reprimands Sidharth for changing his career decision proves that Kiara has also come a long way. Shiv Panditt looks dashing and is dependable. Anil Charanjeett is fair while Raj Arjun makes his presence felt. Abhiroy Singh leaves a mark and suits the part. Nikitin Dheer is great and it’s nice to see him on screen after a long time. Sahil Vaid, as always, does well. Bijay J Anand is okay. Mir Sarwar is good but has got stereotyped in such roles. Zahoor Zaidi and Afnan Ashia are fair in their small roles. David Browne is hardly there. Shataf Figar (Lt Col YK Joshi) has an important role and lends able support. Krishnay Tuteja (Junior Vikram Batra) and Kavay Tuteja (Junior Vishal Batra) are cute. GL Batra (Pawan Chopra) and Kamal Kanta Batra (Vijay Meenu) don’t get much scope.

Sidharth Malhotra: “Being a SOLDIER was Vikram Batra’s only DHARM, he was waiting ke …” | Shershaah

The music is average but thankfully, the songs are well-placed and spaced out. ‘Raataan Lambiyan’, ‘Ranjha’ and ‘Kabhi Tumhe Yaad’ are decent. ‘Mann Bharryaa’ is the best song of the lot and played at a significant point in the film. ‘JaiHind Ki Sena’ is not a part of the film. John Stewart Eduri’s background score is theatrical and enhances the impact.

Kamaljeet Negi’s cinematography is spectacular and captures the locales of Kashmir beautifully. Amit Ray and Subrata Chakraborty’s production design and Eka Lakhani’s costumes are realistic. Stefan Richter and Sunil Rodrigues’ action is not too gory and adds to the excitement. Also, the war scenes are very well mounted and look very authentic. Red Chillies.VFX’s VFX is convincing. A Sreekar Prasad’s editing is neat.

On the whole, SHERSHAAH is a well-made war saga that is sure to make your heart swell with pride and your eyes moist. Sidharth Malhotra delivers the finest performance of his career in this film which would have been a huge box office hit had it been released in cinemas. It releases just around Independence Day and hence, it’s sure to get very good viewership. Recommended!