Starz’s Outlander wrapped up its sixth season tonight leaving SO many questions unanswered — yes, that was indeed the finale, one for a season that was shortened due to the pandemic. 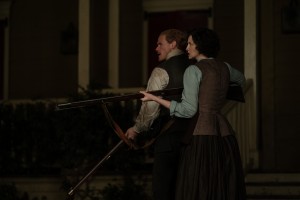 But if there’s a fandom that’s proven to be (mostly) patient it’s those dedicated to the timeless love story of Claire (Caitriona Balfe) and her beloved Jamie (Sam Heughan), one that is threatened yet again by separation.

The episode titled “I Am Not Alone” opens as Richard Brown (Chris Larkin) and his men, guns drawn, arrive at the Fraser home looking to arrest Claire for the murder of Malva Christie (Jessica Reynolds). But Jamie won’t let her go without a fight. A gun battle ensues leaving the couple to wait for nightfall when more will arrive ready for battle.

To keep Claire entertained amid a huge amount of stress, he reflects on all the times he’s come close to death and somehow survived. “You think you have 9 lives?” Claire asked him. He replied, “I hope so.”

A catnap is interrupted as villagers arrive to ensure Claire is arrested and they will not go quietly. Many of the same people who were welcomed to Fraser’s Ridge by Jamie Fraser himself are now throwing rocks at Claire and accusing her of being a witch as well as a murderer without trial or evidence. No good deed goes unpunished, one could say.

Nevertheless, the people want justice for Malva, a woman who claimed to have gotten pregnant by Jamie as a result of an affair they shared behind the back of his wife who was also Malva’s mentor. Leading the pack is Malva’s father Tom (Mark Lewis Jones), who assures the Frasers they are safe in Brown’s hands and he will make sure of it by going on the journey to Wilmington where she will face trial for her alleged crimes.

For some unknown reason, neither Claire nor Jamie has told Tom nor any of the angry villagers that Malva had bedded at least two men including Young Ian (John Bell) who was ready to marry her and be the father of her child. Alas, someone had other plans and killed the pastor’s daughter but the episode doesn’t reveal who.

Somewhere far away, Brianna (Sophie Skelton) and Roger Mack (Richard Rankin) share one of the few moments of happiness in the episode. They finally have confirmation of their son’s parentage thanks to a face infestation. Jemmy gets a short haircut that reveals a unique birthmark on his scalp that matches one that Roger has. An adorable Jemmy also shares a sweet message with the baby growing in his mum’s belly about how much he loves them already.

Back with the Frasers, Young Ian has miraculously found his aunt and uncle and promises to search for help. It won’t arrive soon enough, however, as Claire and Jamie have become separated on the orders of the treacherous Richard Brown.

Tom promises Claire her husband is safe and would be going home but he is taking Brown’s word on the matter which isn’t worth very much. Tom carries on the journey with Claire unwilling to check on Jamie’s wellbeing, which is the only choice at this point. They both know she’s as good as dead if he were to go after Jamie.

The truth is, Brown wasn’t exactly lying. He had a ship ready to take Jamie home — to Scotland. But before he could set sail, Young Ian arrives with the Mohawk saving his uncle’s time just in the knick of time.

“I told you I would fight with you, Bear Killer,” Chief Bird (Glen Gould) tells Jamie.

Jamie escapes unscathed yet again with an uncertain future ahead.

Season 7 of Outlander is already in production in Scotland.