EXCLUSIVE: Given how late the Oscars are this year on March 27, and how Covid held older adults back from attending cinemas, an Oscar halo effect was never expected to take place at the domestic box office for Best Picture nominees.

All eyes were on streaming.

But, was anyone watching?

In an exclusive set of viewership data from third-party streaming data corp Samba TV, we can actually see the impact Oscar noms made on movie-watching at home, and the results aren’t exactly anything to jump up and down about.

Apple Original Films’ CODA, the expected Best Picture winner, was hardly watched by anyone with 375K viewers stateside taking in the Sian Heder directed and written title. Less than a million watched the movie on AppleTV + since it first dropped on Aug. 13 last year. Samba TV measures those US Smart TV households who watched a movie for at least five minutes; the company’s sampling excludes mobile viewing.

At the same time, the most watched movies during the Oscar nomination frame of Feb. 8-March 20 were Searchlight’s Nightmare Alley and 20th Century Studios / Amblin / Disney’s West Side Story with respectively 2.1M and 1.9M US households. Now, these titles’ viewership figures are weighted next to others on the chart below. For the Guillermo del Toro directed noir title, Samba measured how many watched on both Hulu and HBO Max; Nightmare Alley dropped on both services on Feb. 1. Similarly, for the Steven Spielberg directed musical, Samba monitored viewers on both HBO Max and Disney +. 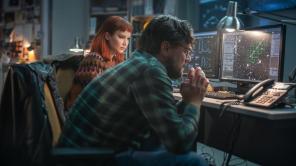 Meanwhile, the most watched Oscar Best Picture contender clocked 94% of its viewership outside the nomination period and that’s Netflix’s Adam McKay all-star ensemble environmental satire Don’t Look Up which Samba says 10.3M watched in the US On Netflix’s own viewer metric, they’ve clocked that their global subscribers have watched 389.5M hours of Don’t Look Up since it dropped on Dec. 24, 2021. Likewise with Power of the Dog, close to 80% of 3.4M Netflix US viewers watched the 12x Oscar nominated movie outside of the nom frame to date. That movie according to Netflix is ​​also a most-watched title to date; their streaming top 10 streaming charts indicating that global viewers took in over 46M hours of the Jane Campion directed western.

Meanwhile, Denis Villeneuve’s Dune, which counts these Oscar nominations, collected close to 1M viewers since Oscar nominations were announced on HBO Max. Note in regards to that movie’s lifetime viewers of 5.3M, the Frank Herbert sci-fi adaptation was pulled off HBO Max after its first 31 days due to the studio’s contract with exhibition and returned to the streamer on March 10. Dune was part of Warner Bros. ‘pandemic day-and-date plan last year whereby titles went into theaters and on HBO Max at the same time for their first 31 days. Dune is the only Oscar nominated Best Picture this year to gross over $ 100M. In 2020, there were at least five Best Picture nominees that had grossed well beyond $ 100M.

So what are the takeaways here from Hollywood’s continued Bacchanalia with streaming, especially during the Oscar season?

With a reported 75M US subscribers, Netflix is ​​king next to its rivals in the subscriber count and will remain so for quite some time when it comes to launching an awards contender. They have the biggest footprint and can make the biggest splash, whereas frosh services like AppleTV + are grasping for viewers with reportedly less than 20M US subscribers. Essentially, in a matter of 11 days in its return to HBO Max, Dune pulled in what is CODA’s lifetime viewership to date. An Oscar Best Picture win for CODA would truly come as a huge advertisement for AppleTV +, hopefully driving more subs.

It’s been buzzed that Netflix shelled out some $ 50M on the entire soup-to-nuts campaign for Power of the Dog. Should the movie lose to CODA it would come as a great upset given Netflix’s dominance in the streaming space both in regards to viewer reach and promo spend. Netflix’s attribute is that they began publishing their series and film viewership figures on a weekly basis starting back in November. While it’s a smart means to prop the popularity of their shows and movies during awards season, the drawback is that it’s a metric based on the OTT service’s own standards. Netflix’s weekly top 10 lists aren’t an agreed upon, third-party monitored means of measuring all movies and TV shows in a given week.

It’s also worth noting that Nightmare Alley and West Side Story‘s audiences were accumulated from both titles’ near immediate availability on streaming during the Oscar nom frame. They were also two films that respected an exclusive theatrical window. That said, it took two streaming services, not one, to bolster each movie’s viewers, underscoring how a majority of streamers outside Netflix just don’t have the footprint power.

And this is why, again, many streamers remain silent about their viewership numbers: There’s nothing to brag about yet because they don’t have the bandwidth. It’s all basic cable TV viewership at this point if you think about it. What’s considered a great number on streaming? For Samba TV, Netflix’s first weekend of Red Notice clocked 4.2M US households, arguably the streamer’s most watched ever, while the Ryan Reynolds movie The Adam Project isn’t far behind with 3M. Meanwhile, Pixar’s Turning Red at 2.5M US is the best weekend premiere ever on Disney +.

Cole Strain, Head of Measurement at Samba TV said: “There is a tight race forming for this year’s best picture. While much of the media attention has focused on front runners like CODA and The Power of the Dogif streaming audiences decided the winner, then we might be in for an upset for either Nightmare Alleywhich has picked up streaming momentum since February, or Don’t Look Up, which has been streamed by more households than any other best picture nominee. Meanwhile, the one market where many voters live, Los Angeles, seems to have embraced West Side Storyperhaps giving Steven Spielberg the inside track to pick up another best picture win. ”

If it was a muted affair for Best Picture Oscar nominees on streaming, well then it was completely awful at the box office. Keep in mind the nomination period this year was much longer at 48 days whereas in 2020 before the pandemic, it was only 28 days between the time when Oscar noms were announced and Oscar night. And the Oscar nominated titles made substantially more at the box office over that shorter period compared to this year’s crop. Between noms and Oscar night, Universal / Amblin’s 1917 made $ 89.9M, Sony’s Little Women grossed another $ 27.7M, NEON’s Parasite (which would ultimately win Best Picture) did $ 10.2M, Searchlight’s Jojo Rabbit grossed $ 8.2M, while Quentin Tarantino’s Once Upon a Time in Hollywood, an August 2019 release, made $ 1.2M and Warner Bros. ‘ Joker, an October 2019 release, did $ 1.1M.

The most amount made by a Best Picture nominee this year was MGM / UAR’s Paul Thomas Anderson’s 1970s comedy Licorice Pizza which took in an extra $ 4.2M after noms were announced. With $ 17M at the domestic box office, the movie gross-wise stands in the filmmaker’s wheelhouse: his 2002 Adam Sandler romantic comedy Punch Drunk Love made $ 18M and his previous 2018 Oscar lauded title, fashion drama The Phantom Thread earned $ 21M. For the most part of the movies that made any money post noms –Licorice Pizza, Belfast, West Side Story, and Drive My Car– were ones that stuck to a theatrical window (Drive My Car dropped on HBO Max this month, but Samba TV did not have any stats on the Japanese film).

Despite CODA, Power of the Dog and Don’t Look Up receiving a limited theatrical release (either timed with their streaming date or advance of), neither Netflix or Apple report box office. Box office analytics company EntTelligence tells Deadline that the average ticket price for Oscar nominated Best Pictures was $ 10.12, whereas Netflix and Apple’s movies go for an average price of $ 9.12 in theaters.

Some of the lackluster results here boils down to product; this year’s line-up of Oscar Best Picture nominees were a niche bunch, not exactly the types of movies which would rally at the box office next to 2020’s riveting mix of a WW1 war movie whose action is one continuous take, a rollicking femme crowd pleaser , an R-rated DC villain and a number of zany auteur works. It’s not to say that distributors didn’t expand theatrically after nominations this year; they certainly did.

And yes, the box office for Oscar titles was impaired by the pandemic, experimental windows, and it’s only now that we’re seeing men and women over 35 feeling comfortable about returning to the movies (NRG reporting that both demos are nearing 80% in their somewhat or very comfortable level).

It used to be that great box office results were a means to tout the success and raise the profile of an Oscar contender. The two went hand-in-hand: Oscar noms boosted box office, and great ticket sales lend themselves to propelling a movie during awards season.

After this season’s results, is that even a marketing tactic anymore?

Or will Hollywood take the quieter, undisclosed viewership route on streaming?

Whether CODA or Power of the Dog takes Best Picture, it’s clear it’s another year where the awards race was judged on aesthetics rather than bucks or eyeballs.