“Look, there’s a lot in this show that is about family trauma and it’s about the perpetuation of family trauma,” says Power Book II: Ghost creator Courtney Kemp of the Michael Rainey Jr. and Mary J. Blige-led series that unveiled a very deadly Season 2 finale tonight. 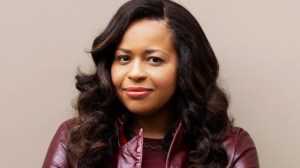 “You see Tariq trying to end the cycle by getting his sister back to their mom,” the showrunner and Powerverse boss notes of Rainey’s character saving the Paris Morgan played Yasmine from being adopted and the Naturi Naughton portrayed Tasha. “You see Tariq trying to be a better version of himself which is really following in his father’s footsteps a different way,” Kemp adds of the now hustling Tariq and the shadow of Omari Hardwick’s deceased drug kingpin James St. Patrick.

In an extra-long “Love and War” finale tonight on Starz, the Gaberiela Uribe penned episode saw Rainey’ Tariqonce again escape the clutches of the law thanks to pivotal testimony from his well-heeled college roommate and drug business partner Brayden Weston (Gianni Paolo). As Tariq moved to keep his sister out of the system and reunite her with the long-gone Tasha, his not-so-straight and narrow defense lawyers of Davis MacLean (Method Man) and Cooper Saxe (Shane Johnson) pulled him into their own respective webs and schemes.

At the same time, Mary J’s Tejada drug cartel Queenpin Monet is playing a long game with both ends of a fiery sword with old flame Dante/Mecca (Daniel Sunjata) and her now out of prison husband Lorenzo Tejada (Berto Cohon). In a show built on betrayals and bloodlust, the tenth episode of Ghost’s second season blows up with Lorenzo shooting Mecca and Monet’s lovechild Zeke Cross (Daniel Bellomy) as the basketball prodigy is about to jump on a private plane. Simultaneously, Tariq takes out Mecca with Monet, but not before behind spotted on a security camera.

Amidst, all that drama and having inked a big overall with Netflix last summer, Kemp herself is exiting Ghost and handing over showrunner duties to Empire alum Brett Mahoney for Season 3. Also, tonight sees the long-awaited debut of the third Power spinoff in Power Book IV: Force as the mothership series’ Tommy Egan, played by Joseph Sikora leaves New York behind and opens up shop in Chicago.

With all that, Kemp spoke with me about tonight’s fatal Ghost finale, opening the Force door, family traumas, and the “fun” of the work she is doing under her big bucks Netflix deal. Joking that she is no longer selling drugs for a living in her new projects, Kemp also reveals her long-term plans for the Powerverse and the importance of moving on. 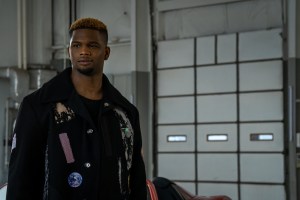 DEADLINE: So, in those last few minutes of this Season 2 finale, we see Monet get the call that Zeke is dead, it is on TV and Lorenzo is sinking inside and we see Yasmine and the return for a second of Tasha. Where is this taking us in Season 3?

KEMP: Well, I mean, what we’re seeing are the consequences of everybody’s actions but I think what we’re seeing is sort of two trains running which is now when they have paid ultimate price for deception and a whole lot of reality will be crashing on her. Obviously Lorenzo murdered Zeke by mistake. Is that obvious? I’m just asking, right?

DEADLINE: Not exactly 100% obvious, if you know what I mean? 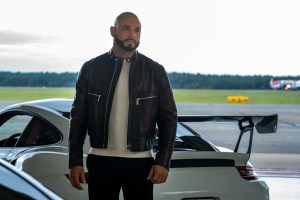 KEMP: That’s a big mystery for Season 3 which is when will Monet know, will she know, how will she find out, what will she do when she finds out? And then in terms of Tariq’s story, he’s back in business with Monet, he’s been implicated in the murder of Mecca. Blanca is back to chase him so, they will be having the white whale going into season three. And Tariq is unaware entirely that Brayden, who he now trusts probably more than anybody else, and Effie helped conspire behind his back to harm Lauren. So, a lot of secrets will be revealed in Season 3 and relationships will be ruptured and shifted forever.

DEADLINE: And the ever-flexible Saxe is shifting sides again…

DEADLINE: No one is really in love in the Powerverse, even if they think they are …

KEMP: (LAUGHS) This is what I would say. I maintain still, and I’m writing this series from the perspective of, you know, people fall in love because they like the reflection of themselves that they see in the other person’s lives. It’s not really about loving that other person, it’s about what that other person makes you feel about yourself. So, in this particular case what Jenny is offering him is redemption. He’s fallen so low…remember, he was a US Attorney for five minutes. He’s fallen so low that now he’s like the mop-up, clean-up dude for Davis MacLean who is a really unethical so and so. So and so’s probably not the sexiest way of saying that, a real unethical motherfucker.

So, he’s feeling some type of way about what he’s done and what he’s implicated in. He also knows Tariq has murdered several people, right? I mean, he’s got some conflict about that. I mean, he’s a prosecutor, he still believes in some archaic sense of right and wrong. So, I think what’s nice is Saxe’s relationship to Tariq is complicated and then his relationship with Jenny is pulling him in a direction. Should he trust Jenny? Probably not but it doesn’t matter because he’s hooked.

DEADLINE: In terms of hooked, I never really expected that the Saxe/Tariq relationship would be so pivotal to the Ghost series and yet it is and yet it’s such a, for obvious reasons, a carryover from the father to the son from the original Power…

KEMP: It’s about telling the story in a way that gives the audience the most fan service, right? 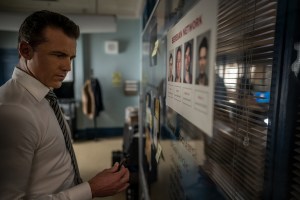 DEADLINE: Looking at the better than angle, Power was very good at slitting the throats of its characters, and, as the end displayed, no one was spared. Here you have a double-death finale which is high marks as season finales go. It seems like Mecca’s death was always going to happen but Zeke is going to hit a lot of people hard Was doubling down always the plan?

KEMP: Zeke was actually the decision we made first.

The Mecca death went back and forth for a little while, to be honest with you, between was it more satisfying for the audience for Mecca to die or for Lorenzo to die? We all love Daniel Sunjata and Berto Colon, it’s sad to lose either one of them, of course. But when you get right down to it Monet making a decision for the sake of her family only to lose a pivotal member of that family felt like it was the best and most complex storytelling for that character.

DEADLINE: This episode is your exit as the Ghost showrunner, what is that like for you after all these years, all these series?

KEMP: I want to commend the cast on what an amazing job they did this season and how much I appreciate their trust in me and how much I appreciate our cast, especially the cast of Ghost from Season 1 who trusted that people would watch Ghost. You know, a lot of people said, I’m not going to watch it because Ghost is dead, but they watched. And they came back and I just want to say I’m so grateful to them and to our wonderful cast and crew for trusting me, you know, really for trusting me with their time and their careers.

DEADLINE: There’s a million details, but what is the heart of Ghost for you, its creator?

DEADLINE: I don’t mean to sidestep that, but, with that, do you have an end to Ghost, even now you are stepping back from the day-to-day? 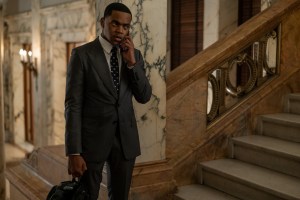 KEMP: Very much I know how I want Ghost to end. However, I made a really serious decision to step the hell out of the way. That doesn’t mean that Brett and other people wouldn’t be open to hearing my ideas, in fact most of them have heard them, you know? I just don’t know that I can have it both ways.

KEMP: Which is to walk away and say I want to focus other places, but by the way, there’s this large, byzantine kind of complicated story to get to this outcome with all these bells and whistles and flourishes and step forward and back that Tariq is going to go through to get to this one specific end and this one specific dilemma that I want you to do. That you guys have to figure all that out on your own.

DEADLINE: Speaking of that, Ghost is getting a new showrunner, but Starz is getting a whole new series with Power Book IV: Force and the long-awaited return of Tommy Egan. A double death season finale on Ghost and a double header on Starz tonight, what’s that like as send-off’s go? 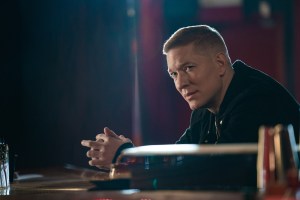 KEMP: I mean, I am really grateful and excited. For me the Force show, the focus for that for me is Joseph.

KEMP: Joseph has worked really hard to get here. He deserves all the success in the world and that’s really the focus for me. I mean, that really is what I think is the most important thing about Force is like being the little engine that could, like believing in himself. He’s a walking testament to just believing in yourself and believing in your craft and working hard and showing up every day to do your best.

DEADLINE: Talking about journeys, could you see yourself on a road one day that leads back to the Powerverse full-time again?

KEMP: I mean, I can’t really… I’m really excited and happy to be at Netflix. I could tell you one thing, I’m not selling drugs for a living any more (LAUGH). So, I’m working on projects that are outside of that wheelhouse.

DEADLINE: And that’s a good place for you?

KEMP: I feel so good because Ghost set itself up, it’s been successful, it’s proved the haters wrong, it’s got its own engine now and I feel really…and then I guess the best word I would say is like proud.

I needed a new challenge and the running the three shows, supervising the Power universe became less about writing and more about air traffic control.

DEADLINE: What does that mean?

KEMP: It means, more about fighting about budget or having conversations about, you know, how things are going to get produced. At one point, I just thought, that’s not what I want to do. I want to write stuff. I like writing and so, I’m writing now, you know? I’m actually literally right now in the process of beginning to write some things. It’s just great and I just feel really blessed and lucky that I get to write for a living. That’s what I really want to do, write for a living.

DEADLINE: Sounds like the perfect start to a new chapter all round…

KEMP: Yeah, I’m having a lot of fun at Netflix, thus far it’s been super fun. But, you know, I’m still in touch with the cast of Ghost I went to the table read, the 301 table read and saw everybody. We’ve been doing these IG Live so I’ve been staying in touch with everyone. You know, it definitely, feels like sending your kid off to college, you know what I mean? But you know, I’ll always be part of that universe.