“I invited you also because I wanted you here when I told my family I’m throwing my hat in the ring for DA,” the only daughter of DA battling NYPD Commissioner Frank Reagan (Tom Selleck) added to the shock of her brothers, nephews, sister-in-law, grandfather and father.

“I guess I realized one of the reasons I wasn’t running was I may be afraid of losing,” Moynahan’s character goes on to say to the family around the weekly dinner table and a very distinct look from nearby Frank, who has been encouraging such a move for a while. “But I think if I have your love and support, I’ll be unbeatable,” she concludes in what may be news to her rival, boss, and progressive inclined current Blue Bloods DA Kimberly Crawford (Roslyn Ruff).

Setting the stage for one of the major plot lines of Season 13, the sit-down ending of Season 12 of the Kevin Wade-run CBS series once again reveals a show that still knows and plays to its strengths. Even though there is some gruesome corpses (by broadcast standards, at least), reunions, tense improv bombsquading, sex trafficking busts, and an adoption, warhorse Frank Reagan, his cop clan and extended family all make it out alive and intact in the Siobhan Byrne O’Connor penned the ‘Silver Linings’ final.

Executive producer Wade chatted with me about the Season 12 finale of the Donnie Wahlberg Will Estes, Marissa Ramirez, Vanessa Ray, Len Cariou and sometimes Will Hochman co-starring series. As well as addressing the fictional civic headbutting between the Big Apple’s top cop and the top prosecutor that mirrors what’s going on in many cities and jurisdictions across the nation, the EP also gave a bit of blueprint of just how that DA race could play out in Season 13 of Blue Bloods.

DEADLINE: The very public showdown between Frank Reagan and female African-American DA Crawford that’s been brewing over the treatment of non-violent criminals and more that we saw take sharp shape in this year’s season finale is a hot button topic in New York, LA and elsewhere between real-life cop shops and the elected DAs Why was this where you wanted to plant a narrative flag?

WADE: When we gathered to shape up stories and themes for Season 12, we landed on a dynamic for all our characters that went, more or less: We’re cops, and an Assistant District Attorney. We are not spokespersons, or pundits, or politicians gauging which way the winds are blowing. We are law enforcement, and what we have been under attack, sometimes justly, often unfairly, for the last while now. So we can either quit and find another way to make a living, or we can stay and do what we do well. We choose to stay and fight.

DEADLINE: Was that dynamic successful over the season in hindsight?

WADE: Not every story in every episode hewed to that or tried to. But the overriding dynamic we aimed for was telling stories about a family and extended family of law enforcement professionals choosing to get back to the basic reason they signed up in the first place – to try and get some justice and mercy for people who deserve it and to arrest and prosecute the people who deserve that. 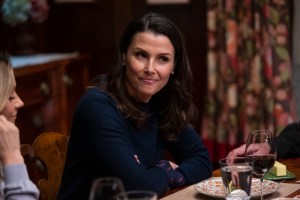 DEADLINE: In that context, the other big swing was Erin Reagan finally taking the electoral plunge herself after some not so-subtle nudging by her father…

WADE: We have played her under four or five DA’s, with whom she often clashed over principles as well as over ways and means. So, for her character the choice seemed to be: if you think you can do the job, then ask for it or else, sit back down. Time’s come for her to ask for it by announcing she’s running for the office.

DEADLINE: How will that practically play out over the next season?

WADE: A Season 13 would have two tracks for Erin. Doing the job she has, and challenging herself and being challenged about her fitness for the job she wants. And what she’s willing, and not willing, to do in order to get it. So plenty of horse-trading, soul-searching, and disruption with the powers that be, her partner Anthony, and especially her family.