“We’re telling a story about New York, which if you take a 10% cross section of New York, you’re going to get all people from all walks of life, from all faiths, and we needed to do that justice,” DMZ showrunner Roberto Patino says of the decision to look at the periphery of the acclaimed comic for its March 17 launching HBO Max adaptation. 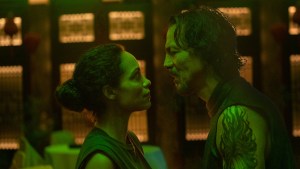 “I have a very specific angle in this, which is to celebrate Latinos in specific, but all people of color,” Patino adds, joining us today with DMZ star Benjamin Bratt on Hero Nation.

“What is this really about?” Bratt remembers asking himself he told us about this “immense canvas” of America in “the throngs of a second civil war” and those left behind on the island of Manhattan. The actor who portrays Spanish Harlem Kings boss and potential Governor Parco Delgado. “It’s about a few different things, but chiefly it’s a family drama,” the Doctor Strange vet notes of the Ava DuVernay directed and executive produced, Ernest Dickinson directed, and Rosario Dawson co-starring four-parter.

Take a listen to the podcast here:

On another note, today we mourn the loss of Neal Adams, a legend of comic culture and of American culture.

The truly revolutionary Adams passed away at the age of 80. Long an advocate for artists, Adams with Dennis O’Neil and other collaborators changed the way we perceived what comics were capable of as literature and storytelling with his work on Batman, Green Lantern and many more. Blessed be his name.

Also, Anthony just returned from Sin City and the hoopla of CinemaCon. We look at all the projects that were presented and what it means for the Hero Nation and movies overall.

Meet a Montreal magician who has a ‘mind-boggling’ 1.7M TikTok fans

Jacob Bryant Says The Show’s Over Amid Protest – Deadline