The Starz drama Power Book II: Ghost wrapped up its second season on Sunday with a reminder that there is no room for the virtuous in this universe. Not since the murder of Tariq St. Patrick’s (Michael Rainey Jr) twin sister Raina (Donshea Hopkins) in Season 4 of Power, has a death effectively conveyed how easy it is to lose an innocent, avenge their death, and then find a way to move on and continue to live in this gray area where only money and power matter.

But, will the death of Ezekiel “Zeke” Cross (Daniel Bellomy), – in tonight’s episode, “Love and War” – serve as the force to tilt the axis towards betterment?

Zeke was murdered in cold blood by Lorenzo Tejada (Berto Colon) in a case of mistaken identity as the former walked up the steps of a private jet to get away after the drama the followed the revelation that his aunt Monet (Mary J. Blige) was really his birth mother. Lorenzo thought he was taking down Season 2 baddie Dante “Mecca” Spears (Daniel Sunjata), Zeke’s recently revealed father.

In less tragic news, Monet shot Mecca right between the eyes and sent him on his way to a flaming hot afterlife. Lorenzo is frazzled when a breaking news report reveals Mecca was found dead in his own apartment.

Bellomy spoke with Deadline, in a true post mortem, to discuss Zeke’s journey in the series, whether or not he could or should return in flashbacks, and when he found out his character’s fate. 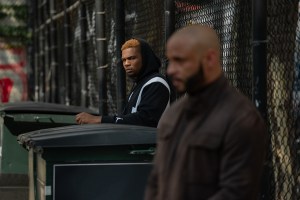 “This season was about sacrifice, and it comes as no surprise to Ezekiel Cross that it came down to this,” Bellomy said of his character’s death. “I look at the sacrifice that was made in terms of Ezekiel Cross and how Monet was holding onto him so tightly, almost to his destruction. As the story moves ahead the question is: Will the sacrifice of his life be in vain? How many more of our people have to be slain because of meaningless stubbornness and greed? Will Monet ever change? Will she tell the truth? Will things change or will they just get exceedingly more wicked? That’s the reality of where he was even though he had his hopes and his dreams and his future, in this world and in this universe, he had to deal with the reality of being Monet and Mecca’s son while also existing in the middle of all this craziness. He had no idea that he was in the middle of it even though he was in it until it was too late. ”

Bellomy doesn’t believe Monet would’ve ever been coming with Zeke, and in many ways, was liberated in his death though this is very much a case of a child paying for the sins of her parents.

“Even as you see him running up those steps on the plane, he knew he was never going to get the truth from Monet,” he said. “And he would’ve been chasing that truth from her forever. At that moment, death was his salvation. This is a world where innocents cannot survive. He was enslaved to his family in terms of, if you remember in Season 1, we talk about how Monet’s word is law. Sometimes people really are just that good and just want to lift people up. He paid for that. ”

He continued, “You know, we wanted Zeke to go on and to leave his family, be an NBA star, and just soar. But, in the end, he ran back to his mom and it cost him his life. Zeke was just so innocent. I’m so sad that Zeke had to go because I love him so much, but as much as one wants to be gangsta on Power, he was just so innocent and so good. I don’t know that I ever wanted to see him go bad. I think he was too far in it to either not get caught up in the crossfire or have to go bad, and I don’t know what that would’ve looked like. ”

Although Bellomy isn’t sure whether there are plans for Zeke to return in flashbacks next season, he has his own feeling on the topic.

“Why would Zeke return as a ghost? If his death was really his salvation, he’s not going to return as a ghost. He shouldn’t, ”the young actor shared. “It would be wrong if he did because then he’d still be a slave. But this is television though so who knows? [Laughs]”

Zeke’s death was a shocking surprise to Bellomy, who didn’t know the character’s fate until the season was almost over.

“Usually when a character’s journey is coming to a close on Power, they tell you about in the middle of the prior episode. It’s Power and it’s a game, ”he said. “I had an amazing experience working on the show and I’m incredibly grateful to have been on this journey with Zeke, who has given me so much. And I’m also grateful to the cast who really set an example for each other, and for those who had the experience before me for showing me how to navigate this experience while holding onto your own agency and you’re own power. The journey continues. ”