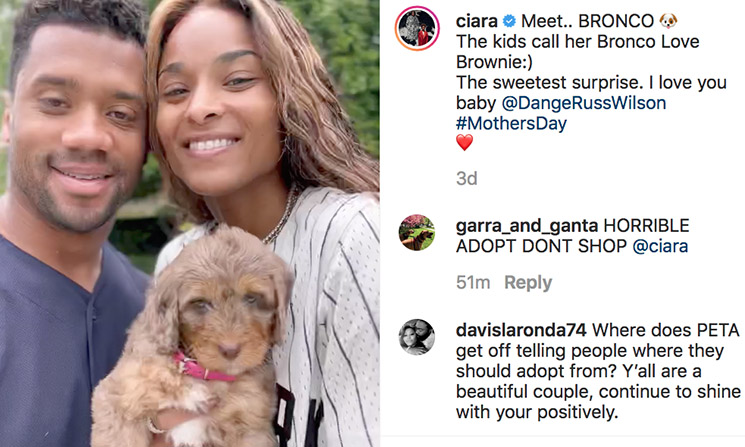 PETA was not happy when NFL star Russell Wilson surprised his wife, Ciara, with a very expensive purebred puppy.

The excited singer introduced her new pet to her 32 million followers on Instagram. “Got a puppy. Her name is Bronco,” she said in the video.

There is a new puppy in the Russell Wilson + Ciara household?

The People for the Ethical Treatment of Animals (PETA) went ballistic after TMZ posted a story about the new puppy.

They demanded to know why Russell didn’t adopt a rescue / shelter dog instead of a purebred puppy.

Purebred puppies are sold by breeders or pet store chains for thousands of dollars.

PETA trolled Ciara in TMZ’s comments, writing: “Mother dogs are often locked inside filthy cages and bred over and over until their bodies give out.”

They said CiCi made a “One, Two, Step ‘mistake by killing a dog’s chances of finding a new home.”

PETA said they’re “calling on the couple to ‘Level Up’ on kindness by adopting a companion for this pup instead of fueling the homeless-animal crisis.”

So far, Ciara and Russ haven’t responded to the controversy.