“For me, I was aching to see these people in the village and these characters, get one last tip of the hat,” Better Things co-creator and star Pamela Adlon said of the FX series’ finale tonight. “That for me was everything.”

Full of freed fish, childhood homes past and present, unlocked bathrooms, a lack of tampons, a re-wedding, a power outage, some Monty Python, and a sun-drenched village of Sam Fox’s extended family, the Adlon-penned and – directed “We Are Not Alone” had all the energy of a show starting, not one ending. That, in many ways, might be the greatest superpower of multiple Emmy nominee Adlon and the secret to the Peabody-winning Better Things success over the years.

We had fun, didn’t we? The series finale of @betterthingsfx premieres tonight at 10pm on FX. Stream on Hulu. pic.twitter.com/V3koXbSqPj

Facing the challenges of being not just the lead on Better Things but the director, writer, showrunner and more, Adlon has been on a long journey both onscreen and off since the show debuted in September 2016. The same is true of Hollywood journeywoman Sam Fox, her three daughters (Mikey Madison, Hannah Alligood and Olivia Edward), her eccentric Brit mother (Celia Imrie) and their extended family.

Full of classic Adlon asides like her glitter-drenched house looking like a “fairy murder crime scene” when her daughters were growing up, the 10th episode of the fifth and final season of Better Things left all the gimmicks outside and invited them in at the same time.

Adlon chatted with me about the finale, the series, her attention to detail and making it to the end. The savvy host of the Better Things with Pamela Adlon podcast also talked about the chance this might not be the last we truly see of Sam Fox. Perhaps.

DEADLINE: So, now it is all done and out there, how are you feeling about the finale and the end of the show?

ADLON: Yes, because for me, it was about building and building. So it’s like that final shot, Dominic – that’s like I’ve got the f * cking solar flares. I’ve got the UFO with the rainbow jet stream. I’m like buzzing about all of it.

DEADLINE: What was it?

ADLON: Getting the drone to go out to the lake to shoot the El Camino driving off into the shooting stars. The challenges were huge in terms of running out of time and needing to shoot the whole f * cking wedding. That was like, in and of itself, it was so much because we had to shoot all of it. Then, my editor Annie Eifrig is a genius and she started chopping away at that f * cking thing months and months ago, and seeing the storylines.

DEADLINE: What was that storyline for you, because there is a lot going on in the finale from Sunny and Jeff’s re-wedding, to that childhood home, that perhaps near the definitive rendition of “Always Look on the Bright Side of Life” with everyone including a whistling Danny Trejo, and a sense of evolving home, no? 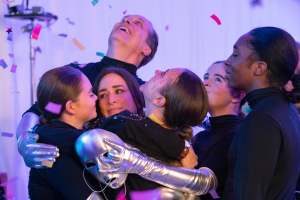 ADLON: For me, I was aching to see these people in the village and these characters, get one last tip of the hat. That for me was everything. Everything was a gamble, and I figured, “Oh, I think I might have enough currency with the people who love this show to have them break the fourth wall.”

I screened the finale at the 92nd Street Y on Saturday, and people were just dead. They died. There were just all these dead bodies everywhere, which is what I like. This one woman said, “I felt like everybody was singing to me” – because she felt like part of this family for these five seasons. I love that. I love hearing that because that’s what it was for. I wanted everybody to turn to the camera and say, “I love you” and blow a kiss. That’s very much by design.

Tonight I’m giving you a sneak peek of the @BetterthingsFX series finale with the amazing @IsaacMizrahi at the @ 92Y. Buy your tickets now. 🦊👽🚽🛸🌈 https://t.co/83SkgHhPL1

DEADLINE: You leave it open ended, so is really the end of Better Things?

ADLON: (laughs) I knew that what I wanted to do was I wanted to plant seeds in the finale that would leave people thirsty for more as if the stories are going to go on.

DEADLINE: That sounds like you are packing more than a podcast…

DEADLINE: In terms of important to people, Sam Fox was so important to so many people, especially her peers. I know you know that, but what has been your reaction to that reaction over the run of the show?

ADLON: Well, it was what I wanted because when I pitched the show originally to John Landgraf, I said, “I don’t see anybody like me on television,” and that’s what I wanted to do. I said, “I want to elevate the mundane.” You know, I was kind of outside my life looking in. Dominic, I didn’t even know about menopause when I started my show. How about that? How do you like them apples? I never said that to anybody yet, and I never realized that until just now with you.

Also, I had all kinds of surreal shit in my head, and in a way, I was able to do… you know, the show is so deeply rooted in authenticity, and that’s what people love, but I have the magic in there. All that magic that people need.

DEADLINE: People saw so much of you in Sam Fox – and not just because you co-created the show, but from the parallels to your own career, your own family and more. But this was no reality show, it was tightly scripted… 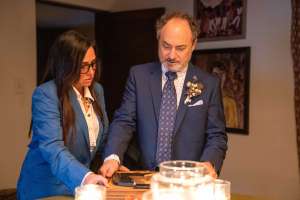 ADLON: It is carefully scripted and down to the last detail, and everything is decided beforehand. But the thing that happens is, on the day, I will be in the restaurant or something shooting the scene, right, and I’ll look at the waiter. And I’ll be like, “Where are you from originally?” Hnd he’ll be like, “Turkey.” And I’m like, “Did your mother ever sing you a lullaby when you were a little boy?” He says yes, and I say, “What was it?” and then he sings it for me. And then all of a sudden, I’ve upgraded this guy.

My line producers are scratching their head, and we’ve just enhanced the scene. It’s a very fluid, organic, moving thing. It’s got a pulse.

DEADLINE: In that context, is the series finale a bit like writing and performing in your own funeral?

You know, it’s funny because that’s how my first AD Sally Sue [Beisel] would talk to me. She would say, “I would like to speak to the actor Pamela now.” But whenever I’m speaking about the show, I’m really speaking as the daddy / mommy cops of the show. Like, it’s never as the actor. It is my job to bring it home, and I could not kind of lose focus at any time.

So a lot of people said, “What was it like shooting last season, and was it really now? Was it very nostalgic when you wrapped everybody? ” And the truth be told, I’ve been going up until this moment to finish this. It was about survival. This season, I thought wow, it’s going to be a piece of cake. Season 5, let’s go, and it was literally about survival.

ADLON: Dominic! The challenges were astonishing for me. You know, not the least being Covid and getting, you know, as much of my crew as I could to the UK and keeping everybody safe. Because, Dominic, I thought about it so much. I was like, what if – God forbid – we can’t get to f * cking England? How am I going to bring this home? We’d shot all the other stuff. 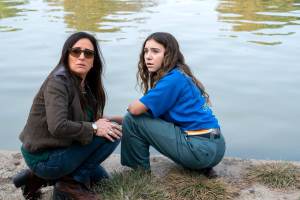 So I was so myopic about “finish, survive and make it better than it ever could have been.” You know, if you don’t care, then you can finish and it may be all right, but you have to care as much as if you were making the pilot and trying to get picked up.

DEADLINE: Now that it is all done, at least for now, what didn’t you have the time to do or couldn’t find a way to break that particular story the way you wanted to?

ADLON: Oh, my God. How long do you have?

DEADLINE: (laughs) I’ll say it again, to me that sounds like there’s a lot more Better Things maybe are to come one way or the other. In your podcast or some other way…

ADLON: Thank you so much. I’m smiling right now.