We had just about gotten it into our heads that after canceling her Las Vegas residency, Adele might step away from performing live altogether for awhile. But after witnessing this BRIT Awards performance it’s clear the Hello singer still has so much to give an audience!

The 33-year-old reminded everyone that after all that fuss over production value, stages, and water illusions, the real special effect was still her golden voice – and the spirit behind it.

Adele took the stage at the ceremony in London, where she was also nominated for four awards this year and won three – Artist of the Year, Song of the Year for Easy On Meand Album of the Year for 30. But it wasn’t her statues that had folks talking, it was the performance of her new classic And Drink Wine. And by performed, we mean performed. She was serving face, throwing undeniable attitude around as she sang lines like:

“Why am I seeking approval from people I don’t even know?”

Feels like the whole thing was a response to critics, who have been thick on the ground lately after her extremely last-minute Sin City rug-pull.

Ch-ch-check it out (below)!

But speaking of production value, did you notice there was quite a lot of it in one particular spot on stage? Yeah. We’re talking about Adele’s left ring finger.

That’s right, the single mom was sporting an ENORMOUS diamond ring on that finger, leading to speculation she and boyfriend Rich Paul are engaged! Get a glimpse during her red carpet entrance (below)!

when I tell you I just gasped !! @Adele has arrived ???? #BRITs pic.twitter.com/SnrwOl4LaQ

Wow! Could they really be taking the next step? We’ve heard Adele has been leaning on Rich a lot lately – and she’s only had extremely good things to say about the sports agent. 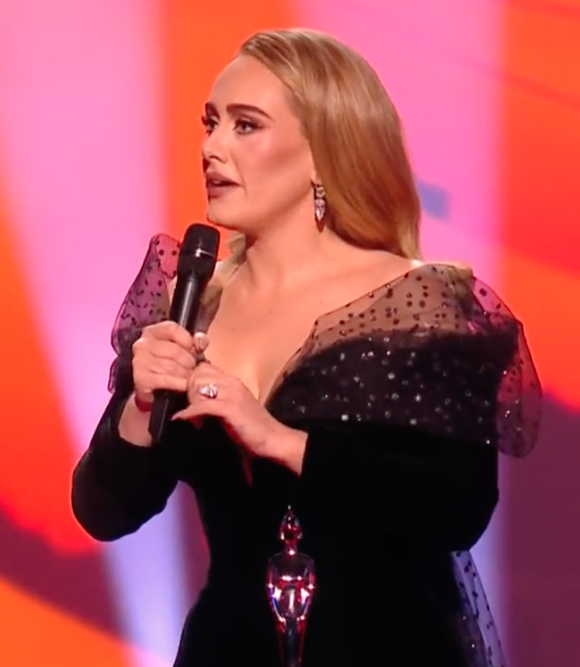 However, we’ve also heard insiders refer to their relationship as “volatile” and problematic for Adele’s stress levels. Some sources even blamed issues between the couple as the reason the singer didn’t show up until so late in the production process for her residency – and why she was never happy the whole time.

But her response to the rumors of relationship trouble, saying “Rich sends his love” in her announcement she’d be coming to the BRITs, seems to imply that’s all poppycock. And certainly the attitude we’re seeing in her performance Tuesday night!

Our big question: why can’t the residency just be gurl onstage alone doing THIS ??